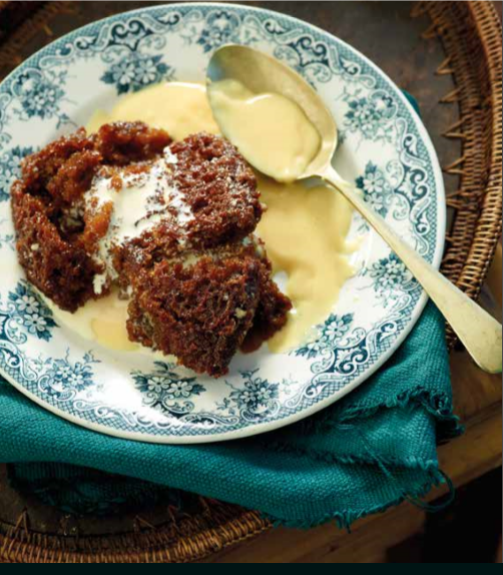 Some time in the late 1970s food guru Michael Olivier, who was responsible for the Boschendal Restaurant, asked his friend Maggie Pepler to come and teach them how to make the original malva pudding. Ever since, it’s been a permanent fixture on their buffet menu. My malva pudding recipe is based on that original recipe and is published with Michael’s blessing. The single biggest adjustment from the original recipe is that I bake the pudding in a no. 10 flat-bottomed baking potjie on the fire, and not in a conventional oven. Serves 6.

1. Light the fire. You need fewer coals than when braaing steak, but you’ll need a steady supply of coals once the pudding is baking. Now use butter to grease your no. 10 flatbottomed baking potjie. You can see a picture of this kind of potjie on page13.
2. Sift the flour and the bicarbonate of soda into a large bowl and stir in the sugar (you don’t need to sift the sugar).
3. In another mixing bowl, whisk the egg very well. Now add the jam, vinegar, butter and milk, whisking well after adding each ingredient.
4. Add the wet ingredients of step 3 to the dry ingredients of step 2 and mix well.
5. Pour the batter into the potjie, put on the lid and bake for 50 minutes by placing some coals underneath the potjie and some coals on top of the lid. Don’t add too much heat, as burning is a big danger. There is no particular risk in having too little heat and taking up to 1 hour to get the baking done, so rather go too slow than too fast. During this time, you can add a few fresh hot coals to the bottom and top of the potjie whenever you feel the pudding is losing steam.
6. When the pudding has been baking for about 40 minutes (about 10 minutes before it’s done), heat all the sauce ingredients in a small potjie over medium coals. Keep stirring to ensure that the butter is melted and the sugar is completely dissolved, but don’t let it boil. If you want a (slightly) less sweet pudding, use half a cup of sugar and a full cup of hot water for the sauce, instead of the other way round as per the ingredients list.
7. After about 50 minutes of baking, insert a skewer into the middle of the pudding to test whether it’s done. If the skewer comes out clean, it’s ready.
8. Take the pudding off the fire and pour the sauce evenly over it. Believe me, it will absorb all the sauce – you just need to leave it standing for a few minutes. Serve the malva pudding warm with a scoop of vanilla ice-cream, a dollop of fresh cream or a puddle of vanilla custard. A good way to keep it hot is to put it near the fire, but not too close – after doing everything right, we don’t want it to burn now.

In the original recipe, the tot measures of apricot jam, butter and vinegar as well as the half tot of
bicarbonate of soda are all given as 1 tablespoon each. These minor changes won’t affect the outcome of the dessert but for the sake of accurately recording history, I think it’s important that we note it.